Another awesome stuff for developers from Microsoft! This past Wednesday Microsoftie Karsten Januszewski announced the Visual Studio Achievement Beta at Channel9. Guess what? as a developer, you are writing hundred lines of code every day without even getting noticed by the community!!? Well, you will get noticed now. Here is an extract from the official post from Channel9:

Bring Some Game To Your Code!

A software engineer’s glory so often goes unnoticed. Attention seems to come either when there are bugs or when the final project ships. But rarely is a developer appreciated for all the nuances and subtleties of a piece of code–and all the heroics it took to write it. With Visual Studio Achievements Beta, your talents are recognized as you perform various coding feats, unlock achievements and earn badges.

Visual Studio is a powerful tool with tons of features, many of which you may not know about. Earning some of the badges may result in learning about features you didn’t even know existed!

With the Visual Studio Achievements Extension, achievements are unlocked based on your activity. Your code is analyzed on a background thread each time you compile. In addition, the extension listens for certain events and actions that you may perform in Visual Studio, reporting progress on these events to the server.

Get the Visual Studio Extension

Show off your achievements

Now you are earning some achievements huh!? Why not show it off on your blog. Grab the script to show off your Visual Studio Achievements. You can see my achievements widget on the right hand side of my blog. Just in case you don’t like the widget, then you can customize the look and feel using CSS and providing additional parameters. You can see more widget examples here and customize it as you like. Apart from this you can also see the leading achievers at the Leaderboard. 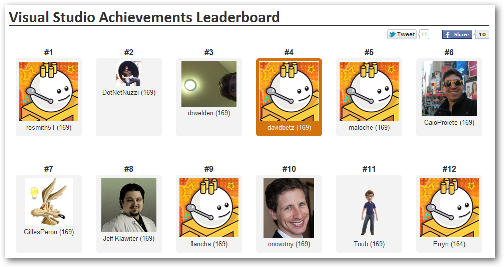 Introducing the Achievement and that too with API is super awesome. I haven’t gone through the Achievement API yet, but if you are planning to write a custom tool then mash it up and share with the community.

So, what are the achievements that we are going to get? There are 6 different badges at the moment and we are going to see more badges in future. Here is a snap of the 6 badges: 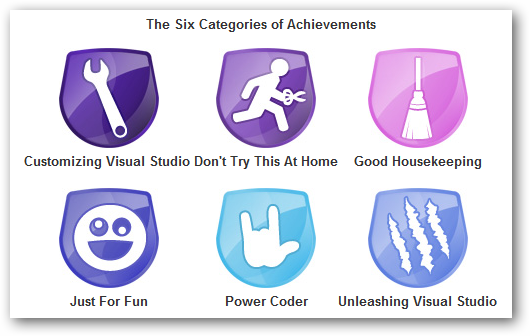 Need to know more in detail about these badges then read about them here. Let’s get started people, bring some game to the code you write from now on!!