In the past decade Marvel has gathered a lot of fan following which eventually lead all the fans to know more about how the Marvel comics universe characters, stories, events are mapped or linked to each other.

In 2017 (if I am remembering it correctly), at Microsoft Build event, Microsoft announces Bot framework and did a demo with CosmosDB graph database which uses Gremlin query from Apache TinkerPop. It was a great demo and I was really impressed how they did it but unfortunately I was unable to find the source code for that demo anywhere. So I thought I should atleast get the graph database for my own use and then sometime later will work on building a NLU bot.

To get started I will be setting up the database using Apache TinkerPop and not CosmosDB due to cost and development speed. Will make use of Gremlin.NET - a warapper around Gremlin Query Language. Let’s download Apache TinkerPop Gremlin Server and Console. These will be downloaded in .zip file, so extract them into a folder and navigate to the bin directory inside each extracted folder and using the command/shell prompt execute the .bat file if you’re on Windows else .sh file if you are on Linux or WSL on Windows. 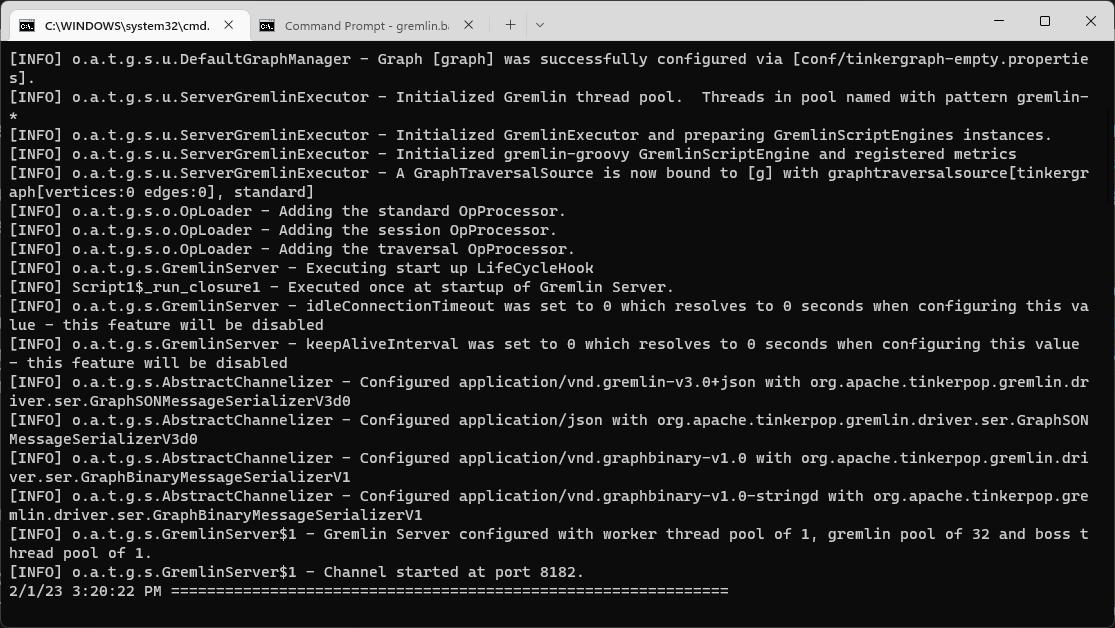 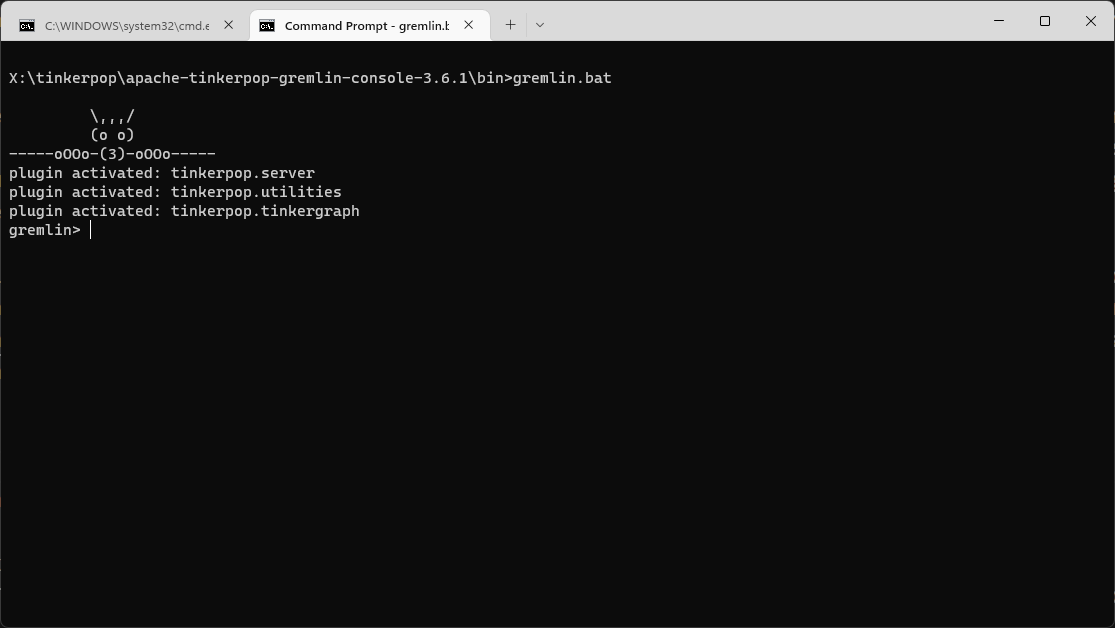 If you are unable to connect to the local server instance, then it might be a problem with your config file (.yaml) which you can find under conf folder in your console folder. Here are the contents of my remote.yaml file.

With connection established, now we can import the graphson data in the database. You can also refer to my Github repo where I have used the raw data from the web to generate the edges and vertices for all Marvel characters. The raw data which is in csv format has some repetitive connections. The repo code ensures that there are no duplicate connections. You can also refer the code if you plan to connect and play with TinkerPop graph database. Running the code and setting up the database will be a bit time consuming, so I would suggest to download the mcu.json file from the repo and then import it which will happen in few seconds.

The data file which you downloaded from the repo mcu.json should be stored on the Gremlin server current working directory. After you placed the file, execute the below command on the Gremlin console.

The above command will take few seconds to execute and then it will return you back to the gremlin console. We can now verify the data by executing this command.

If all goes well, you should see the below output of the above command.

Let’s write some Gremlin queries and find out some information. Go to Gremlin console and test these below queries.

How many people Cap knows?

And who are those people?

Characters who have IRON in their name. Note that this is case-sensitive.

As this is a graph database, it will be nice if we can visualize the data visually. There are few visualization tools I have used so far and GDotV seems to a be popular one. 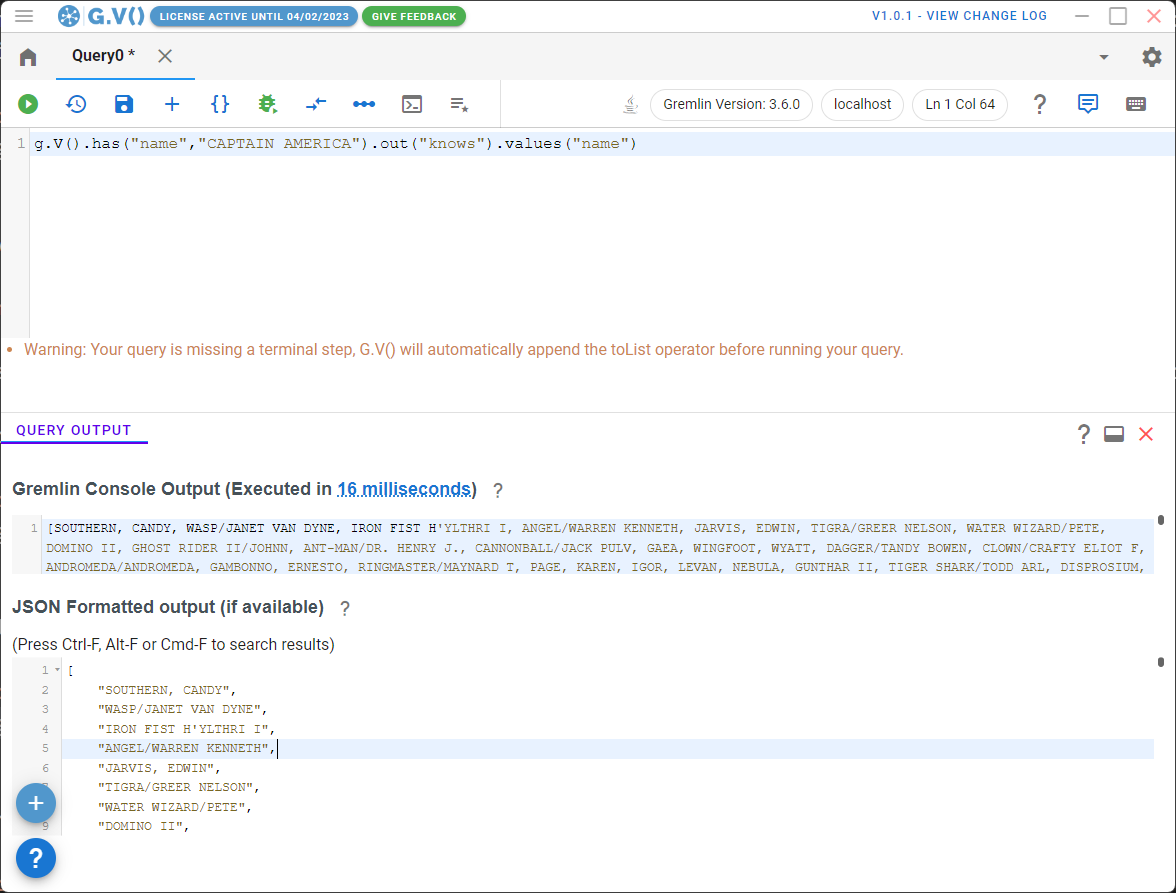 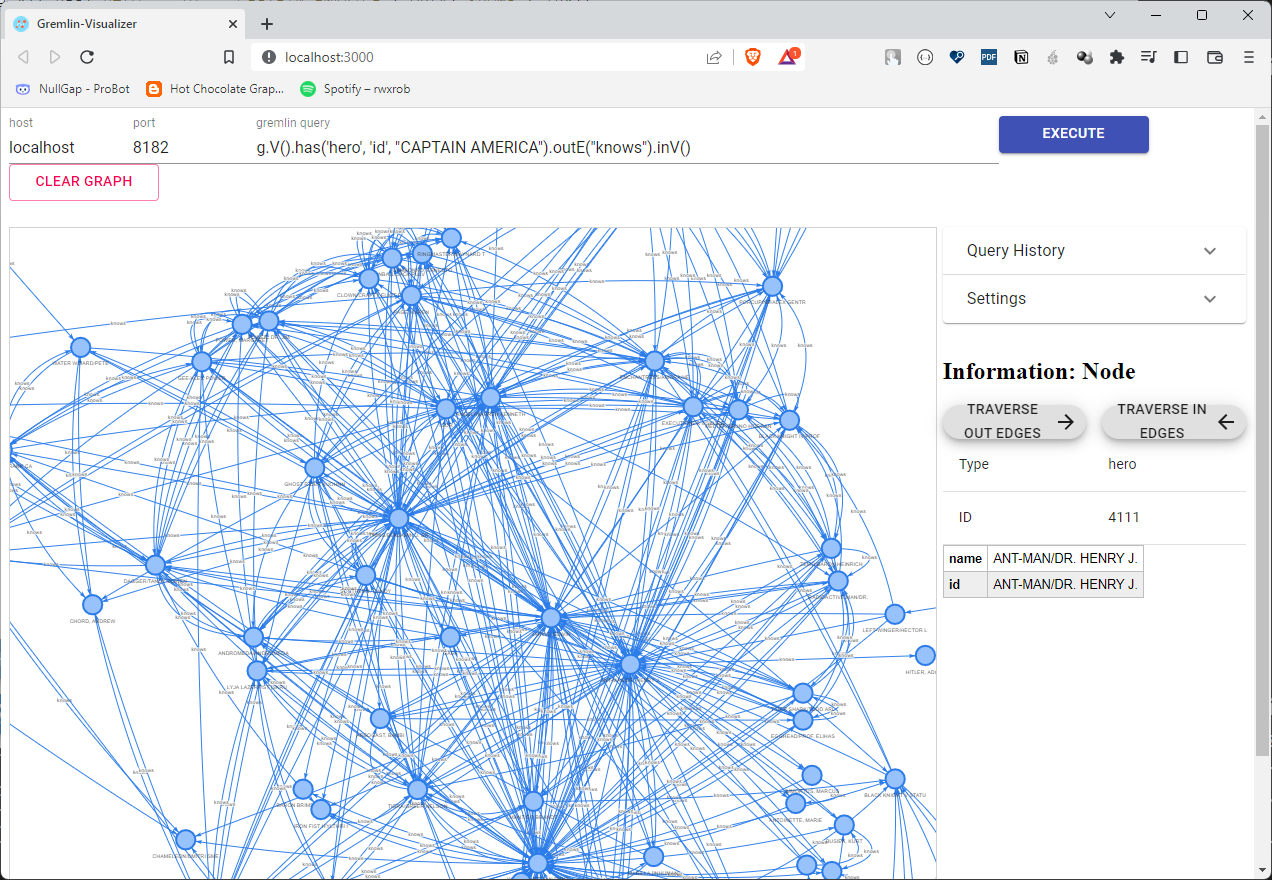